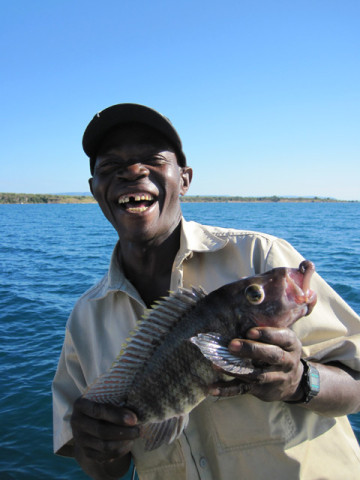 A mini bus, registration number ALG 1303, has been abandoned by the owners in Mungu area in Kafue district after fisheries officers who were on patrol suspected that it was carrying fish.

The bus was carrying 520kg of fresh fish of various species covered in sacks and black plastics.

Mrs Ngalande said the owners of the bus were cornered around 17:00hrs yesterday.

Upon seeing the fisheries vehicle, the bus sped off and was later abandoned in the bush around Mungu.

Acting Provincial Fisheries Officer, Martin Mwale said one of the core responsibilities of the department of fisheries was to observe the fishing ban to let the fish multiply and deter the illegal fishing.

Mr Mwale said Lusaka Province was alert and on the ground because fishing ban is important to ensure that the fish stocks that have gone down improve.

He warned that all those who abrogate the law including the fishermen, traders and transporters, will be prosecuted.

The fresh fish was taken to the magistrate’s court where a disposal sheet was signed.

The court ordered to dispose of the fish by way of donating it to Kafue District Hospital.

The abandoned bus was driven to Kafue Main Police station by fisheries personnel where it will remain until the owner shows up and appear in court for transporting prohibited products.

Kafue district fisheries have intensified the patrol during the fishing ban in the district.

The fishing ban was started on December 1, 2013, and it will end at the month end of February, 2014, to let the fish multiply and grow.