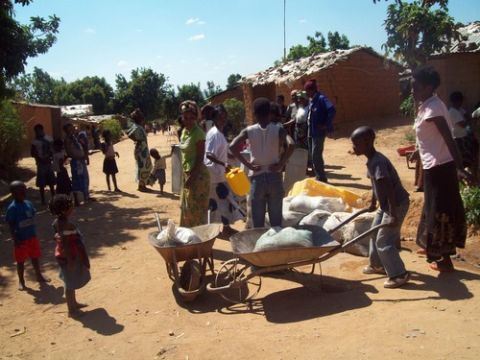 RESIDENTS of Kawama Township in Ndola, particularly parents whose children have to walk long distances to attend secondary school education elsewhere in the neighbouring areas, have a reason to smile now.

They have to be happy because for the first time in a long time, a secondary school in the area has been constructed and is geared to be opened during the next school calendar.

The sprawling Kawama Township in the periphery of Pamodzi and Chifubu townships was accorded the opportunity to have a first secondary school ever by the Promoters of Equality in African Schools (PEAS).

PEAS Zambia network managing director, Rachael Kalaba said Kawama Township was one of the areas her organisation identified to be in need of a secondary school and thus the move was initiated to build one in the area.

Ms Kalaba explained that PEAS, whose head-quarters was in the UK was building secondary schools in areas where there are disadvantaged communities and without a learning facility nearby.

She said Kawama Township was the second place in Ndola to benefit from PEAS after George Township where the first secondary school was constructed for the less-privileged communities in 2012.

She said access to secondary schools in areas such as Kawama and George townships was a challenge to many and PEAS felt obliged to provide opportunities to them.

Ms Kalaba hinted that PEAS’ aim was to provide quality education for the vulnerable children so that they get equal opportunities once they were done with the high school.

However, she pointed out that to qualify to secure a place at the school, only those who will have been registered and whose results will be acceptable at the current examinations will be accepted.

“Anyone to get a place at the school should be registered. The first priority will be given to Kawama residents. That is our target group,” said Ms Kalaba.

PEAS was working in collaboration with the Ministry of Education who will provide the school with qualified teachers.

Phase one of the project has seen the completion of a 1×5 classroom block. Ablution blocks, teachers’ administration room and a kitchen are still under construction but would be completed soon.

Ms Kalaba was pleased to have worked so well with the Kawama community members, the ward councillor and the people engaged in the construction of the school.

Site foreman at the school, Borniface Siame said his team was working flat-out to ensure that construction of the remaining 1×3 classroom block, the kitchen and administration office were completed before the end of this month.

“We are working round-the-clock to see to it that we complete the works before the beginning of the school calendar next year. There is no way we can fail to beat our deadline when all the materials are there. Everything is in place,” said Mr Siame.

Registration of the grades eight and 10 who wish to gain places at the school started on December 2 and would go on for two weeks and is restricted to all surrounding schools in Kawama.

PEAS finance and administration officer, Dirk Phiri said the response from parents and pupils to register was overwhelming as they were eager to get a place at the school which was near home unlike the case is when they were to trek long distances to Chifubu, Kansenshi, Masala and Lubuto townships for secondary education.

“The response is overwhelming. We will do the registration for two weeks and we will consider those who are registering depending on their results based on current examinations,” said Mr Phiri.

At the Resident Development Community (RDC) offices in Kawama Township where the registration was being conducted, a lot of pupils who just finished their examinations flocked the offices in the hope of chancing the opportunity to earn a place at the school.

The pupils and parents expressed their happiness with PEAS for bringing a secondary school in Kawama which they said was a sprawling township with a growing population but did not have any secondary school after being in existence for many years.

A parent, Josephine Katongo who joined a long queue to register her son in the hope of securing a place at Kawama Secondary School was bubbling with joy to have a secondary school constructed in the area.

She said it was a great thing to have a school of such kind in the area because children used to walk long distances to other townships in search of secondary school education.

“We are happy. We thank PEAS for bringing a secondary school here. This is an old township but our children have to go to far flung places for the facilities. This is going to help us in a big way. Even the fees are manageable and this will help our children get proper education,” said Mrs Katongi.

She was echoed by Chongo Kabaso, a pupil in Kawama who said it was a blessing that a secondary school was brought on the door steps of Kawama after a long time.

“This is good. They have brought a secondary school near our homes and we will not be travelling long distances to other places. The fees the school is asking for are also low and our parents can afford them,” said Kabaso.

The establishment of a secondary school in Kawama has not only cheered parents and would-be pupils to the school, but also the ward councillor, Alfred Chapi who was all smiles.

Mr Chapi said he had for a long time yearned for a secondary school in his ward but things were not forthcoming until now when PEAS came to his ward.

“I am very pleased to have a secondary school in this place during my tenure of office. I started fighting for this in 2009. As you know in Chifubu, the nearest township here, we have only one secondary school – Temweni – and the children have to walk to other constituencies in search of secondary school education.

“It was my dream that we have a secondary school within my ward. In 2009, I met the director of COIN Foundation – a big construction company in UK who in turn connected me to director of PEAS UK, John Rendell who agreed to build a school in Kawama. I am so thrilled with joy that this has happened,” said Mr Chapi.

He thanked Ndola Mayor Davies Chiwala together with other councillors for the support rendered to acquire six hectares of land for the construction of the school while he thanked the Kawama community for their support.

At a meeting held recently concerning the school, PEAS education promoter, Libb Hills said her organization which has been in existence for two years in Zambia has the biggest network in Uganda and aims to expand its services in Zambia.

“This is the second secondary school to be constructed here with the first being George secondary school near Twapia Township. The school will open with an initial enrolment of 180 grades eight and 180 grades 10 selected from those that will pass current examinations.

“In view of its nature of accommodating the most vulnerable in society, the school will also admit those who fell out of school for failing to meet high school fees but can manage our fees of K135 per term for grades eight and K160 per term for grades 10,” said Ms Hills.

The school will enjoy among other things, teacher support, donor aid and low school fees.

Indeed Kawama residents have the need to celebrate the establishment of the first secondary school in their area.