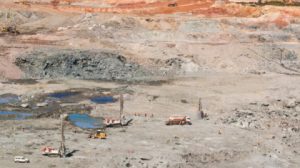 FIRST Quantum Minerals Limited (FQM) has completed major works towards construction of a US$2.4 billion Sentinel Mine at Trident, located 150 kilometres west of Solwezi.

FQM resource optimisation manager at Trident John Gladston said in an interview in Ndola yesterday that the project was on course and would be completed within the stipulated time.

Mr Gladston said infrustructure such as rock crushers, sag mills and ball mills, have been installed at the processing plant which is expected to produce 300,000 tonnes of copper per annum.

“Construction of the Sentinel mine is progressing very well and so far, we have completed 70 per cent of works on this project which is expected to create alot of business opportunities for Zambia”.

“Equipment in conformity with morden technology has already been installed, including the crushers which are annualy estimated to transform 55 million tonnes of rock into ore,” Mr Gladston said.

When commissioned next year, mining operations at Trident would also create alot of revenue for the national treasury through mineral royalty.

“Sentinel is a strategic project focussed on expanding the mining indusrty and we are working collectively with the Zambian Government to ensure that this project is delivered on time to create jobs and wealth,” he said.

Sentinel is among three mines that FQM is developing in Zambia.

The other two are Enterprise, which concentrated on developing nickel deposits and Intrepid, whose resource is yet to be determined.