Together, the Boeing and Airbus orders, excluding purchase rights, are worth an estimated US$ 99 billion at list prices. This is the largest ever aircraft order in civil aviation and also Emirates’ largest order announced at any event to date.

Emirates’ Boeing 777X order is the single largest aircraft order by value in the history of U.S. commercial aviation, and the additional A380 order cements Emirates, already the largest operator of this aircraft type, as the principal customer for the A380 worldwide. These latest orders bring Emirates’ total firm order book to 385 aircraft (excluding options or purchase rights), comprising 214 Boeing 777s, 101 Airbus A380s, and 70 A350s, at a total estimated value of US$ 166 billion.

“Air transport is a key enabler of world trade, and we see that demand for aviation services will continue to grow globally. What we’re announcing today is a continuation of our commitment and vision to connect the world through our efficient hub in the Middle East. Emirates’ aircraft orders today, with deliveries of the 777X scheduled to start in 2020, will take us to 2025 and beyond – replacing aircraft due for retirement and providing the foundation for future growth,” said HH Sheikh Ahmed bin Saeed Al-Maktoum, Chairman and Chief Executive of Emirates Airline and Group.

“We are honoured by Emirates’ commitment to the newly launched 777X and the significant long term boost this provides to U.S. exports and jobs,” said Boeing Chairman, President and CEO Jim McNerney. “Emirates has been an integral part of the 777 success story for many years and today operates the largest fleet of 777s anywhere in the world. We look forward to further strengthening our partnership with Emirates and continuing to support Dubai’s expansion into a global aviation hub.”

“By strategically placing the A380 at the centre of its business, Emirates is maximizing its leading position with each day of operations. Emirates has understood from the start the A380’s advantages in terms of efficiency, economics and passenger comfort. It has been a true crowd-puller and contributor to the rapid development of Emirates and its Dubai hub,” said Fabrice Brégier, Airbus CEO and President. “We value our partnership with Emirates airline and are pleased to see this getting stronger each day with their A380s flying.”

“The announcement today includes the purchase of 300 GE9X engines from General Electric, to power the 150 Boeing 777X aircraft ordered. Taking into account the U.S. Government jobs multiplier (every $1 billion in US aerospace exports supports 5,747 American jobs), today’s historic order will protect and support over 436,000 jobs in U.S. aerospace manufacturing – not only at Boeing and GE facilities, but with hundreds of other suppliers,” said Sheikh Ahmed.

“Emirates today operates more than one in every 10 Boeing 777 aircraft built. It is the workhorse of our fleet. What the 777X does, is offer us a flying range comparable with the 200LRs and 300ERs, but with more passenger capacity at potentially up to 18% more fuel efficiency,” said Tim Clark, President Emirates Airline.

Emirates’ unwavering commitment to the Boeing 777 dates back to 1996. Today, Emirates is already the largest operator of the 777 with 131 in operation, and the only airline to fly all variants in the 777 family. At the 2011 Dubai Air Show, Emirates ordered 50 Boeing 777-300ERs with options for 20 more at a total value of US$ 26 billion (AED 95.4 billion). It was then a record breaking aircraft order– the single largest by any airline with Boeing in dollar value.

Emirates currently operates the world’s largest fleet of A380s with 39 in service. 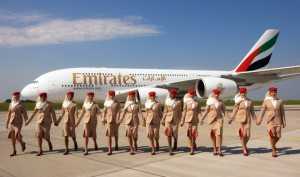 Its order for 50 additional A380 aircraft today brings Emirates’ total A380 order book to 101 aircraft, worth US$ 45 billion. A combination of two and three-class cabin configuration, the first 25 of these latest A380 aircraft orders are scheduled to be delivered before the first quarter of 2018.

“The A380 continues to be the flagship of our fleet, and after five years in operation it remains highly popular with our passengers,” said Tim Clark, President Emirates Airline. “It is still one of the most efficient aircraft to operate today in terms of fuel burn and emissions per passenger, and it gives us the flexibility in some cases to meet passenger demand in slot-constrained markets. This latest order will help us meet both fleet expansion and fleet replacement needs.”

Emirates has been associated with Europe’s largest passenger aircraft since April 2000 when it became the first airline to announce plans to purchase the super jumbo. As the largest customer for the A380, Emirates is therefore the largest supporter of European aerospace manufacturing jobs tied to the A380 programme which is spread across Airbus’ manufacturing centres in France, Germany, England and Spain.

Emirates operates a modern and efficient fleet of 208 all wide-bodied aircraft, connecting people and opportunities across its global network of 137 destinations in 77 countries. Based in Dubai, Emirates is one of the world’s largest airlines by international air traffic, and one of the most recognised airline brands in the world through its support of premier sports and cultural events. With the 200 firm aircraft orders announced today, Emirates now has an order book for 385 aircraft (excluding options and purchase rights) comprising: 101 Airbus A380s, 70 Airbus A350s, 150 Boeing 777Xs, 61 777-300 ERs and three Boeing freighters, worth more than US$ 166 billion.