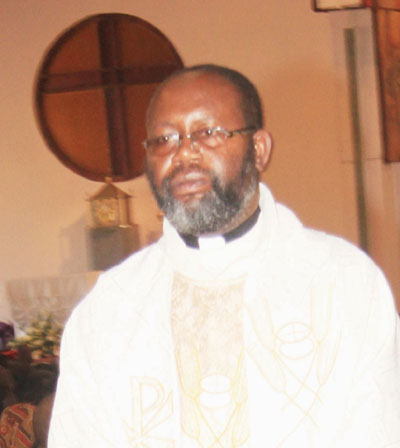 St IGNATIUS Church Parish priest Charles Chilinda is deeply concerned about the death of a cadre in last Thursday’s unprecedented Patriotic Front (PF) intra-party violence that left a huge black dent on Zambia’s reputation as a country of peace.
During a 07:00 hours mass at St Ignatius Church in Lusaka yesterday, the priest also took a swipe at public-owned media such as theZambia Daily Mail and the Times of Zambia for “glossing over” the story of the death of Moses Simwela.
“Many people were very very disappointed that the story of the death did not appear in the most widely read newspapers such as theDaily Mail and the Times of Zambia.
“My worry is that if you don’t report a death of an innocent person, it means you condone the violence and the barbarism,” Fr Chilinda said.
He said the media – especially the public media – should always remember that its duty is to the people and not to individual interests because Zambians are intelligent enough to see a cover up when one is in front of their eyes.
Fr Chilinda who is known for his advocacy preaching at St Ignatius also called on the PF to soul search and heal itself as soon as possible in order to avoid further needless loss of lives.
“At the end of the day God shall give guidance to our President, his excellency Michael Sata who is a staunch Christian himself,” Father Chilinda said, “and he shall through Gods guidance make the right decision to ensure that these deep differences that have cost us a life are halted…he will do the right thing in the name of the lord and we are all praying for that.”
Father Chilinda said the church would pray to ensure that a repeat of the Rwanda genocide does not happen in Zambia, a country known for peace.
Apart from the death, some five people were critically injured and got admitted to the University Teaching Hospital.
President Sata has condemned the violence and has demanded for justice.
Edgar Lungu, the Home Affairs Minister has instructed Inspector General Stella Libongani to give him hourly and daily reports on how the police are progressing in netting the perpetrators.
The police have so far arrested 23 people over the incident.
Mr Lungu has asked the police to be impartial in their probe.
“I want no stone un-turned in this matter,” Mr Lungu said.  “I want no one spared in this investigation.  A life has been lost and someone must pay in order to send a message that the PF government and President Sata stand for peace and discipline.”