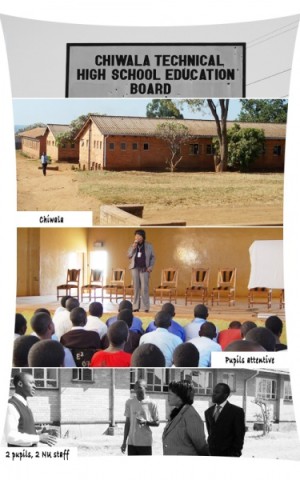 Tweet
THE year was 1963. A small school was born right where Ndola Primary is situated. A year later, the place was found not to be conducive. Authorities sought audience with Chief Chiwala of the Lamba people in Masaiti District for land.

The chief did not hesitate to allocate land for the building of the school that would, three decades later, produce Zambia’s third Republican President Levy Patrick Mwanawasa and several other people who have contributed to the development of the country in various spheres.
Chiwala Technical High School is the name of the school. It is a school known for plenty of things, but its mark on Zambia’s education sector is pretty obvious.
1963 to 2013 marks, 50 years. Thus, the school recently celebrated its golden jubilee in style. A lot of people attended the joyous celebration and took an emotional trip down memory lane. Looking back across the years, through sunshine and stormy weather, a lot has happened at the school surrounded by big companies, like Ndola Lime, Zambezi Portland, Dangote Cement, Chilanga Cement, Bwana Mkubwa Mine and several more.
The golden jubilee celebrations coincided with the prize giving ceremony to deserving pupils and graduation for Grade 12 school leavers. The prize giving ceremony, which has been running for eight years, has been solely sponsored by Ndola Lime from inception.
Dance, drumming and drama were part of the glamour that left a lot of memories with it, especially for ex-Chiwala Technical High School pupils. Parents, teachers and pupils danced their legs out. A bull was bought and slaughtered to brai during the feast.
As for the awards, their essence has always been to recognise the excellent academic performances of pupils in every academic year as well as other areas where pupils and clubs performed exceptionally well.
A good number of pupils from this famous school have been selected to go to the University of Zambia (UNZA) and Copperbelt University (CBU) after attaining very good marks.
There is no doubt that education is the bedrock of development of every progressive nation. Education not only refines but also reforms the beneficiary.
District Education Board Secretary (DEBS) for Masaiti, Binos Mubonde said, “Discipline was the cornerstone and pillar of success in any human endeavours. To attain a high moral and academic standard, one has to be disciplined,” he said.
True, education gives people the ability to choose which is right and desirable and to discard that which is wrong and dishonourable.
Among the desired qualities expected from our out- going Grade 12 pupils are humility, creativity, honesty and resourcefulness.
To the graduating pupils, the advice was candid. “Decide to firmly pursue your goals, armed with the values and knowledge imparted by parents and teachers, you shall excel in all your endeavours,” he said.
Fifty years of existence of Chiwala Secondary School is indeed a commendable feat. However, the school infrastructure is not up to the standard of its existence.
“I earnestly appeal to other corporate bodies, philanthropists, public-spirited individuals to contribute to the facelift and rehabilitation of the school,” said Mr Mubonde.
Government on its part would continues to uplift the standards of the school in terms of provision of learning and teaching materials, infrastructure, adequate and qualified staff.
Ndola Lime Company has been the sole sponsor of the school’s Annual Award and prize giving day.
To the outgoing Grade 12 pupils, they were advised to behave well as they go to face social challenges in society.
“The HIV/AIDS pandemic is real and taking the lives of the youths like you who are future leaders of the country,” he said.
Ndola Lime Company, being the sole sponsor of the awards was indeed proud to be part of the golden jubilee celebrations and awards giving ceremony.
The lime company has also contributed towards the rehabilitation of Luangwa hostel and the construction of the school library.
Chief executive officer Abraham Witika, through the corporate affairs officer, Muka Meleki assured the school management and the community that his company would continue to support the school which he called “the ever productive institution in the years ahead”.
He urged pupils to jealously guard the infrastructure.
Mr Witika also urged the Chiwala Old Boys Association to take a lead in developing their former school.
School headmaster Clement Chonza advised outgoing students to be responsible citizens in society.
Despite its fame, the school’s infrastructure needs a facelift, which former Chiwala pupils have a duty to help the school.
He appealed to other corporate bodies to contribute to the facelift and rehabilitation of the school.
“I congratulate Ndola Lime management and staff for this commendable initiative which has been contributing to the high academic standard of the pupils as evidenced in the high intake of Chiwala Secondary pupils in UNZA, CBU, Mulungushi University and other tertiary institutions,” Mr Chonza said.
Ultimately, Chiwala Technical High School golden jubilee celebration was done in style.
It is only hoped that cooperate bodies and indeed, the ex-pupils would look into the plight of the school and do something to improve the infrastructure.