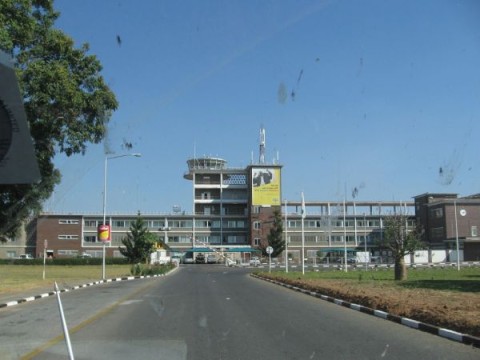 Tweet
President Michael Sata has cautioned China Jiangxi Corporation, the contractor engaged to reconstruct and expand Kenneth Kaunda International Airport, to finish the works before the end 2014 or risk being sent back to China.

Speaking during the laying of the foundation stone for the reconstruction and expansion of KK International Airport this afternoon, President Sata cautioned the contractor to adhere to the terms and conditions of the contract if they want to continue working in Zambia.

The Head of State also urged Chinese Ambassador to Zambia, Zhou Yuxiao, to ensure that all Chinese contractors who have been contracted in the country speed up their respective works or risk being sent back to China for failing to adhere to terms and conditions of contracts.

Mr. Sata has since urged China Jiangxi Corporation to ensure that they do a quality job.

Speaking earlier, Chieftainess Nkomesha Mukamambo the second of the Soli people in Chongwe District appealed to President Sata to seriously ensure that his government introduces a national airline by next year.

The Traditional leader notes the urgent need for Zambia to have its own airline that will contribute significantly to the economic development of the country.

She has also appealed to Zambians to continue praying for President Sata so that he continues with the good works that he has done since coming into office in 2011.

And first Republican President Dr. Kenneth Kaunda, has urged President Sata not to pay attention to criticism coming from the opposition political leaders but focus on developing the nation as promised in 2011.

Dr. Kaunda says some people are sick in thoughts and if President Sata pays attention to them, he will lose direction and fail to develop the nation.