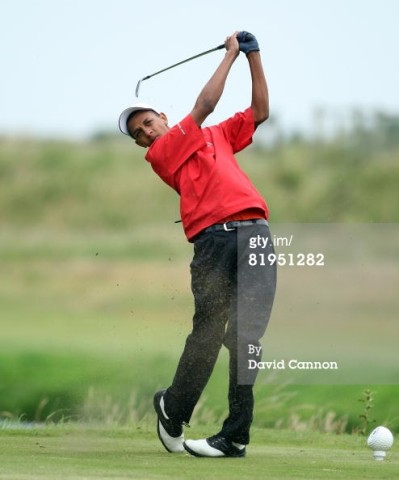 Tweet
ZAMBIA’S golf sensation, Dayne Moore on Sunday defied all odds when he fired a sizzling nine-under par 207 to win the 2013 Lubumbashi Open Championship in the Democratic Republic (DR) of Congo.

After trailing to South African, Jean Carroll in the first two days, Moore finished strongly in the final 18 holes when he shot four-under as the early pacesetter crumbled badly with a woeful seven-over par 79.
Moore had shot four-under par 68 on the opening day and managed one-under par 71 in the second round.
‘‘I played against quite a good number of guys. They played pretty well but there was one guy who gave me a tough time whom I only beat by one shot. But it was really a nice game and to win it in the end was great,” Moore, who was playing in the Lubumbashi Open for the second time,’’ said.
The Ndola-based professional beat Belgian Gerald Greese by a stroke to pick up the US$5,000 top prize and raise the Zambian flag high as other local professionals, Obed Sholoma and Rabson Kopalande found the tough going on the DR Congo terrain.
Moore said his focus now was to continue working hard and compete in the qualifiers for the South Africa Open Championship.
In the amateur ranks, Zambia finished overall fourth behind DR Congo teams of Kinshasa, Lubumbashi and Likassi. The annual event was attended by golfers from Ghana, Ivory Coast, Gabon, Australia, South Africa, Belgium, Zambia and hosts DR Congo.
Zambia was represented by 19 amateur players who included former Zambia Golf Union (ZGU) president, Matthew Nkhuwa, ZGU treasurer Joel Chitambala, former ZGU honorary secretary Constantine Chimuka, former Ndola Golf Club captains Garry Rutherford and Ashwin Harry.
Others, who also made the trip were former Zambia Rugby Union vice-president, Clavel Nguluta, who was team leader, Noel Nkoma, Chongo Kasongole, Chad Muleza, Raju Sharma, Mukund Desai, RK Patel, Vijay Thakur and RC Desai.
Meanwhile, the Zambia Ladies Golf Union (ZLGU) has unveiled a provisional squad to represent the country at the 2014 A and B Triangular Tournament in Botswana.
The A Division squad has Chola Oka, Kekelwa Kwalombota, Vainess Armitage, Dolly Mbambara, Exhildah Ndaba, Esther Wemba and Rose Katebe while the B team has Regina Ngosa, Beatrice Chubebe, Sara Zulu, Brenda Phiri, Lynette Simuchimba, Given Banda and Angela Banda.
ZLGU president, Moono Mwila challenged the players in the provisional squad to work hard, warning that those who would slacken would be dropped. Mwila said the top five from each category would make the final squad for the event scheduled for Gaborone in April next year.
The provisional team was picked after the 2013 Zambia Ladies Open Match Play Championship in Ndola on Sunday.