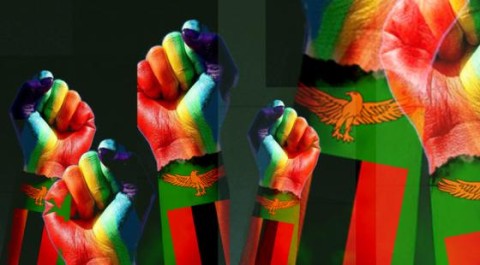 On 16 October 2013, the long awaited trial of human rights activist, Paul Kasonkomona, proceeded in the Lusaka Magistrates Court in Zambia. Evidence led by the State during Kasonkomona’s trial confirms suspicions that the arrest and prosecution of Kasonkomona was politically motivated.

On 7 April 2013 Kasonkomona was arrested outside Muvi TV studios after he appeared on a television programme, the Assignment, where he spoke about the rights of LGBT persons. Kasonkomona was charged with an offence in terms of section 178(g) of the Zambian Penal Code, which provides that “every person who in any public place solicits for immoral purposes” is deemed an idle and disorderly person, and liable to imprisonment for one month or to a fine.

Kasonkomona was eventually released on bail on 11 April 2013. At the time, Zambia’s Vice President, Guy Scott, in an interview with the UK’s Guardian newspaper, said: “The problem with this guy going on television was that we had to do something because if we had done absolutely nothing we would have got a bollocking from all these evangelical churches plus damn idiots. On the other hand, we didn’t want to give him a particularly hard ride.”

The first witness called by the prosecution on 16 October 2013 was Mabvuto Phiri, the producer of the Assignment programme. He testified that he was involved in all pre- and post-production aspects of the programme, including the development of the concept, script and title of the programme. Phiri testified that the programme started at 19:15 on the Sunday and was broadcast live across the African continent.

According to Phiri, the rationale for the topic of the programme, “Gay rights or human rights”, was that it was a hot topic during the national constitutional consultation process in the preceding week. Phiri explained that he specifically sought a human rights activist who had been part of the constitutional process as a guest to explain in more depth the rights arguments that were raised during the constitutional process. According to Phiri, it was in the public interest and in the interest of freedom of expression, to create a platform for an informed debate on gay rights. What followed was a partial screening of the Muvi TV Asssignment programme on which Kasonkomona appeared.

The interview is indeed worth watching as Kasonkomona made an impassioned plea for recognition of the human rights of all individuals in order to stem HIV transmission. Kasonkomona explained that he had been living with HIV for 15 years – “The last thing I want to see today or tomorrow is a person who is HIV negative today testing HIV positive tomorrow.” He argued that the abstinence campaign had not resulted in a reduction in HIV incidence, even among heterosexual people, and that every intervention to prevent HIV should be embraced, including decriminalising same-sex sexual practices and improving access to safer sex materials for LGBT persons.

The prosecution then led the evidence of Reverend Pukuta Mwanza, the Director of the Evangelical Fellowship of Zambia. Mwanza testified that he had not personally watched the programme on 7 April 2013, but had received a call late that evening from Bishop Joshua Banda, Chairperson of the National AIDS Council, alerting him to the programme. Mwanza testified that, having looked at reports of the programme on the internet, he was of the opinion that the views expressed by Kasonkomona were contrary to Christian values and the constitution. Mwanza confirmed that the same issues discussed on the programme were also expressed during the constitutional drafting process, yet no person was arrested at that stage. The defence disputed the relevance of Mwanza’s evidence and his testimony was of short duration and of no use to the State’s case.

The third witness called by the State was a detective who had been involved in the arrest of Kasonkomona. The detective testified that he was already informed at 17:00 on 7 April 2013 that an Assignment programme on gay rights would take place. He further testified that he was instructed to go to the Muvi TV studios, “watch a bit and then apprehend” Kasonkomona. During cross-examination it became apparent that the witness had not seen much of the programme. He concluded that Kasonkomona’s statement that it is not wrong to be homosexual, amounted to soliciting for immoral purposes.

The prosecution requested a postponement to call further witnesses. The next trial date is set for 29 October 2013 at 9am in the Lusaka Magistrate’s Court.