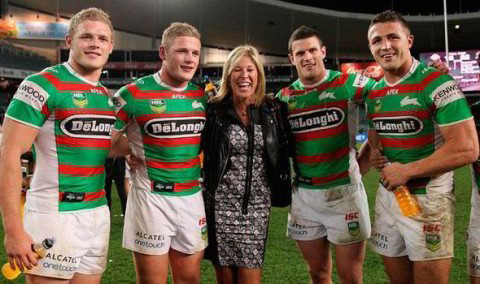 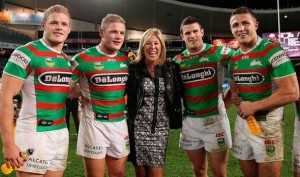 WHEN Oscar-winning actor Russell Crowe was filming Robin Hood on location in the UK in 2009 he one day invited a particularly intriguing couple for a meeting in his trailer.

One of them was a striking 40-something blonde, the other a 6ft 5in 20-year-old who tipped the scales at well over 18 stone.

The trio spent the next three and a half hours deep in conversation and by the time their talks were over a deal had been struck that was to have far-reaching consequences for the future of English rugby league. For in addition to being a Hollywood star, Crowe has a controlling share in the South Sydney Rabbitohs, the Sydneybased club that is an institution in Australian rugby circles.

He is always on the lookout for promising new talent and when he saw a player known as the “Beast of Bradford” thanks to his uncompromising performances for the Bradford Bulls on Sky Sports he resolved to lure him to Sydney.

He duly obtained a number for Sam Burgess and called to invite him and his mother Julie for a lengthy on-set pow-wow. The rest, as they say, is history. The silver-tongued star of Gladiator succeeded in persuading them that Sam should join his club rather than its arch rivals Manly and a sporting fairy tale began.

Sam, it turned out, was just one member of a rugby-playing dynasty and within three years, he had been joined at the Rabbitohs by brothers Luke and twins Tom and George, who were so alike at school that one had to wear red boots and the other blue boots so referees could tell them apart. When George became the final Burgess to head Down Under mother Julie upped sticks too, quitting her job as an assistant head teacher at a school in Leeds to work at Scots College in the Australian capital.