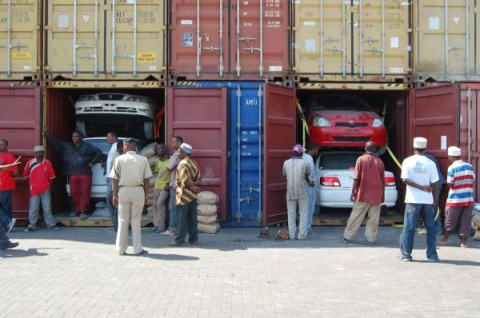 Pondering on the action taken by Tanzania’s Minister for Transport, Dr Harrison Mwakyembe, on the release of two Zambian buses that were denied passage at the weigh bridge in Kibaha, simply on flimsy reasons; (recently) I came across a very disturbing news item from Zambia.

The story had nothing to do with Mwakyembe’s action that indeed, he tried to do some damage repair to the hazy business working relationship with Zambia.

This one is about the recently tripartite meeting that brought together Zambia, Namibia and DRC top government officials in Lusaka to discuss the benefit of making use of the Trans-Caprivi Corridor Port linking Namibia, Zambia and part of DRC, Lubumbashi. Another similar meeting was slated to take place (last) week in Lubumbashi.

It appears the new preferred route for Zambia and the international market is through the port of Walvis Bay according to that meeting of the Walvis Bay Corridor Group (WBCG). The meeting was intended to create awareness on the benefit of utilising the Walvis Bay Port.

The Trans-Caprivi Corridor is managed by the Walvis Bay-Ndola-Lubumbashi Committee supported by UNCTAD for capacity building programme on Transport, Trade Facilitation for Landlocked and Transit Development.

UNCTAD has identified Trans-Caprivi Corridor as a model centre in Africa and support in development of the Corridor’s cluster committee.

It is said the Zambian exporters benefit tremendously through the dry port facility of Walvis Bay that has been established exclusively for Zambia using this facility as their entry point to serve SADC market to the rest of the world.

The inefficiency of the Dar es Salaam Port has forced Zambia to think for another alternative which is cost effective. Similarly the DRC business people have been complaining of pilfering of the cargo destined to DRC.

Walvis Bay became a natural option and therefore the ultra-modern infrastructure was constructed and opened in 2004 with the Zambezi Bridge at Sesheke linking the two countries. They are further to connect the two countries railways from Livingstone in Zambia to Grootfontein in Namibia.

On this move, I had expected Dar es Salaam Port would have improved to meet the demands of her most strategic client to the south, Zambia but that was not the case.

Instead Dar Port was saturated with corruption and notoriety of its unfaithful workers until when Mwakyembe came in too late to rescue the situation.

Some of my columns in this paper in those years when I was in Namibia raised alarms as to what was going on in the south. I could see the seriousness which was attached to the construction of these infrastructure (Trans-Caprivi and Trans-Kalahari).

They now have the best infrastructure, road, rail and shipping crisscrossing in their counties. Virtually within the SADC countries where Tanzania is a member may lose the once lucrative business of dominance in haulage of cargo destined to the South.

The competition has been so stiff with several efficient working ports such as Durban, Cape Town, Maputo, Walvis Bay and Luanda all catering for the South Africa Sub region particularly unlocking Zambia.

May be Tanzania should rethink its position in East Africa where it is considered to be one of the strongest entities in comparison to the SADC where it sounds like an alien. What is our position in the East African Community? Of late there has been some harsh exchange of words from Rwanda to Tanzania and exaggerated by the local press from both countries.

They are engaged in deeper integration without Tanzania.

In between, there have been two summits of which Tanzania was not invited. Even before this crisis of Tanzania and Rwanda, Tanzania has been dragging its feet in fast tracking East African political federation.

Tanzania is hesitant on its position when it comes to competition for work opportunities. From this, it is now clear that the other countries have adopted a theory of “Coalition of the willing,” as President Kikwete was not inclusive in those summits.

The second summit took place at the Mombasa Port where the issues of cross border infrastructure were discussed at the expense of the absence of Tanzania.

It was in such a gathering where different responsibilities were dished out to the relevant countries that attended the summit.

Cross border responsibilities were thus distributed. Kenya was assigned to be responsible for pipeline, electricity generation and distribution while Rwanda was for Customs, single visa and East African Community and identity cards.

Uganda has been assigned to deal with railways and political federation.

All necessary economic ventures in road haulage, in the south are under the Central, Eastern and South Africa countries entrenched in the Trans-Kalahari and Trans Caprivi Corridors.

Could the mediator in this Rwanda and Tanzania crisis, Uganda’s President Yoweri Kaguta Museveni rise up to the occasion to deal with this problem once and for all!

Can we afford to see our Dar es Salaam port being stifled in favour of the Mombasa Port of Kenya? Does it make sense just over a night the road toll on the side of Rwanda to be raised from US$152 to US$500?

This is purely an economic war against Tanzania and putting it off balance from her economic pursuits. Otherwise which way Tanzania? The north is already grabbed while the South is heavily engaged.

Probably we should position ourselves for the cutthroat infrastructural competitions, otherwise the newly constructed Bagamoyo and Mwambani (Tanga) ports would be needed to come out strongly in this competitive arena lest they may end up being modern ports catering for local use only. – Tanzania Daily News

• Kiangiosekazi Wa Nyoka is a lawyer based in Dar es Salaam, Tanzania. He can be reached at [email protected]