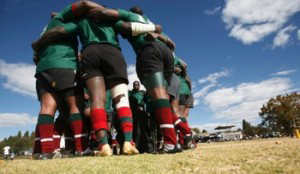 THE Lusaka Rugby Club has disowned its former vice-chairperson Mubanga Chanda for criticising the current Zambia Rugby Union (ZRU) executive for failing to host this year’s Castle Sevens International tournament.
Lusaka Rugby Club secretary Cecilia Tresha said yesterday that Chanda was not a member of the club and should not speak for the club as he abandoned the club soon after losing the ZRU elections in 2011.
“We as Lusaka Rugby Club would just like to state that we do not expect anyone to speak for us. I believe he should speak in his personal capacity because the constitution only allows the sitting chairperson or secretary to speak,” she said.
This was after Chanda criticised the Martin Musunka-led ZRU executive for not hosting the tournament for the second consecutive year, saying it showed the lack of planning on the part of the executive.
But Tresha said Chanda was not a paid-up member of the Lusaka Rugby club, the usual hosts of the
Castle International Sevens to speak on behalf of the club because he was not a member.