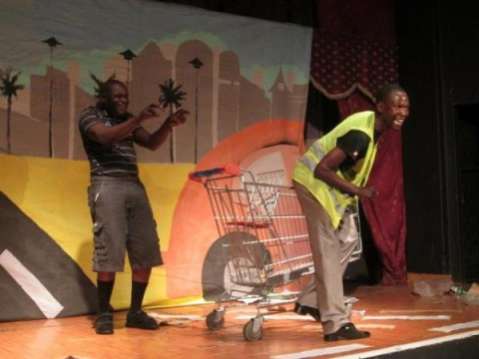 By KELVIN KACHINGWE
THE good news is that the production is returning to the Lusaka Playhouse tonight and tomorrow.
Both audiences on Friday and Saturday last week seemed not to have had enough of A Fig Tree in the Wrong Field, which played fairly well at the Lusaka Playhouse last week.
It is that same reason that prompted Yezi-Arts Promotions and Productions to bring Matero Theatre and Media Arts Society back on stage this week.
For those that missed out, it is an opportunity to see some up-and-coming talent put up some admirable performance.
The play is written and directed by Bizwell Mudenda, Ngoma Award nominee for his role as Innocent in the production Innocent Murderer with Sydney Siafwa, a theatre promoter and actor known for his role as Mainza in a short film Ulwendo lwa Rose (2009 Soul City Project – SADC) assisting him.
The play dramatises real life experiences that women undergo at the hands of society when no child is seen from a marriage, exploring the deep suffering and humiliation they experience from relatives, particularly mothers-in-law and in certain circumstances from the husbands themselves.
It is a typical gender story highlighting the uncalled for attitude that leaves women devastated.
It centres on Thandiwe (Maureen Banda), who has been married to Grant for five years. However, problems start in the marriage when no child is realised from her womb.
And as is usually the case, all the blame is directed on her especially that Grant (Humphrey Chibaya) boasts of an illegitimate daughter from his workmate, the same child to whom another man Thomas claims fatherhood. Hell only gets to break loose when Thandiwe finally gets to conceive.
Thinking that the pregnancy is his, Grant attempts to reconcile with his wife only to be disappointed when she confirms that the man responsible is actually his best friend Sampa. Facing an eviction from the house and having lost his job for financial mismanagement, he turns the gun on himself.
Also featuring in the play is veteran stage actress Inutu Mwanangumbi, who does justice to the role of mother-in-law. She was indeed the fig tree in the wrong field!