SATHYA Sai School has expelled six pupils for allegedly engaging in sexual relationships, which is against the code of conduct for the Ndola-based private learning institution.

It is alleged that the three boys and three girls, aged between 15 and 16 years, were on March 28, 2013 involved in sexual acts in the corridor and acute rooms on the 10th floor of the Zambia State Insurance Corporation (ZSIC)-owned Premium Plaza.

The three boys are said to have got permission from the school authorities to go and buy books but instead went to Premium Plaza where they waited for their girlfriends who were still writing their end-of-term examinations.

The girls later joined their male counterparts at the plaza where they allegedly engaged in various activities of a sexual nature.

The pupils attracted onlookers because of their uniforms. They were also joined by some pupils from Masala and Kansenshi high schools.

The pupils’ actions reportedly incensed the security who later apprehended them and called their parents who immediately came on the scene and reported the matter to their respective schools.

During a search of the premises, security personnel manning the area found used condoms, sachets of highly potent intoxicants and bottles of assorted lager.

Chanda said the pupils had abrogated the school’s binding agreement which deterred them from engaging in immoral activities.

He said Sathya Sai was a non-profit-making institution and its emphasis was on developing the character of the pupils, which was the mission statement and philosophy of the school.

According to the school’s code of conduct, the pupils are expected to abide by the binding agreement to which they and their parents appended their signatures before being admitted to the learning institution.

Chanda said pupils who abrogated the code of conduct were instantly excluded from the school because that could dent the image of the learning institution, whose emphasis was on character development.

He said this was the first time since the school’s inception in 1992 that such kind of immoral behavior was being displayed by the pupils.

Sathya Sai School deputy administrator Rogers Tembo said it was believed that a number of pupils had been using the highrise flats as their “love nest”.

The school’s vice-principal Morgan Kasaba said the institution took the “painful” action to deter other pupils from involving themselves in immoral behaviour.

But ZSIC disputed the report, saying that security did not allow loitering at its premises and had not received any report on the matter. 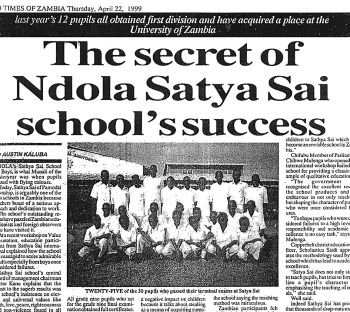