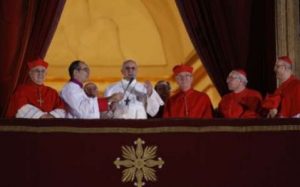 Jorge Mario Bergoglio, an Argentinean Jesuit who is the first in his order and the first from Latin America to hold the see of Peter, has been elected the 266th bishop of Rome and leader of the world's 1.2 billion Catholics.

Appearing on a balcony of St. Peter's Basilica about an hour and 10 minutes after white smoke from a chimney above the Sistine Chapel first signaled his election, Bergoglio was introduced by his birth name with the traditional proclamation of the Latin phrase "Habemus papam," "We have a pope."

Then came pronouncement of the choice of his papal name: Francis.

He is the first pontiff to choose the name, likely for either the 12th-century St. Francis of Assisi, known for his simple lifestyle and dedication to the works of mercy, or for St. Francis Xavier, a 16th-century Spanish Jesuit priest known for his efforts to evangelize, particularly in Asia.

Bergoglio's election came on the fifth ballot and second day of voting among the 115 cardinals who participated in the secret election. It was a surprisingly quick conclusion to a conclave that seemed to have no clear front-runner emerging among the cardinals.

At age 76, Bergoglio is only two years younger than Joseph Ratzinger was when he was elected Pope Benedict XVI in April 2005.

"You know the task of the conclave was to give Rome a bishop," the new pope continued, speaking Italian with a slight Spanish accent. "My brothers went to the end of the earth to get him."

Francis then asked the crowd to join him in praying "for our emeritus bishop, Benedict XVI." Following the "Ave Maria," "Our Father" and "Glory Be" prayers in Italian, the Argentinean then continued: "Now, let's start working together, walking together in the church of Rome, which is the first among churches. This is part of the governance of love, of trust."

"Let us pray for each other, let us pray for the entire world because there is great brotherhood in the world," Francis continued. "I hope the path that I am about to take now and my father will help me to be fruitful for the evangelization of this beautiful city."

Before giving the traditional Urbi et Orbi blessing to those in the crowd, overwhelmingly Italian, the Argentinean asked "for a favor."

"Please ask God to bless me," he said, bowing his head and clasping his hands. A 15-second silence lasted in the reported 100,000-person crowd.

"Brothers and sisters, thanks for the welcome," Francis said, before heading back into the basilica. "Tomorrow I will pray that Mary safeguard Rome. Good night. Good rest."

Widely reported to be the second-place candidate after Raztinger in the conclave held after the death of Pope John Paul II in 2005, Bergoglio is known for a simple lifestyle and for dedication to social justice.

After becoming archbishop of Buenos Aires in 1998, he moved out of the traditional archbishop's palace, preferring instead to live in an apartment. He is also known to cook his own meals, and does not use the services of a chauffeur, instead riding the bus.

Worldwide reaction to Bergoglio's election, thought also to be the first of a man from the southern hemisphere, was immediate.

"Perhaps for the first time in modern times, the global outlook of the church is reflected at the highest level of the church," said Fr. Agbonkhianmeghe Orobator, a fellow Jesuit who leads the order's Eastern African province, told NCR in an email.

"I want to believe that considering the humble and down-to-earth background of Pope Francis I the church is in capable hands — not just the pope’s alone, but the hands of the entire people of God across the globe," Orobator, who is also a noted moral theologian, continued.

"Francis’s first gesture of asking the people to pray to God for him may signal the beginning of a more authentic and humble recognition of the priesthood of the people of God and the responsibility we all bear for the church of God in the world."

People had gathered in St. Peter's Square in sometimes pouring rain throughout the evening Wednesday, keeping their eyes trained on two screens showing images of the Sistine Chapel's chimney for the sign of smoke.

As a moment of uncertainly about the color of the smoke — black for no consensus on the pope, white for his election — gave way with the loud ringing of the Basilica's bell to confirm the news, sustained cheering broke out among those gathered.

Within moments, people were running through puddles and rain, trying to make it to the square for announcement of the new pontiff.

Vatican gendarmes were stationed around the square's iconic colonnades, directing people to specific gates in order to control the flow of the crowd. Inside an hour, people had filled about a half-block of the street leading into the square.

As the waiting for the new pope continued, screams of "Viva il papa," Italian for "Long live the pope," echoed every few minutes. Many waved national flags under their umbrellas.