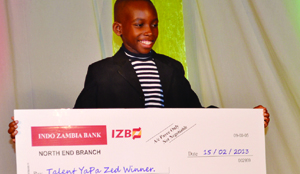 From a total of 12 finalE acts of the Valentine’S dinner night, Mordecai, beat the final selection of the top four that comprised Tiwah Phiri, Todd Sealy and the Prodigy to emerge winner of the famous TYZ.

The undisputedly highly talented boy mesmerized the grand finale audience that included Tourism and Arts Minister Sylvia Masebo who was vividly spellbound with the boy’s unmatched talent for his age.

The minister and other eminent personalities that included ZNBC director-general Chibamba Kanyama and National Arts Council chairperson Mulenga Kapwepwe gave the boy a standing ovation after his amazing performance.

There was tension among the top four contestants after Balad Zulu who apparently made the announcement of the top four handed over the responsibility of announcing the winner to the head judge Kenny Tonga who took less time in making the important and highly anticipated announcement.

The 10-year-old winner was seconded by a Kitwe-based Zambian of American origin guitarist and singer Todd who surprised and entertained masses across the country through singing indigenous Zambian songs in the native languages of Nyanja and Bemba.

Tiwah, the last-female sanding got the third position mainly due to her vocal power which executive producer of TYZ Laurence Thompson confesses that it is unmatched.

The Prodigy were late comers in the competition but managed to impress beyond doubt and sneaked their way through to the top four! What an impressive performance they had to put up.

Speaking after receiving the life-changing prestigious grand prize on the Indo-Zambia Bank dummy cheque, Mordecai thanked God for giving him the talent and said he would never relent to sing praises to Him.

“I just want to thank God for the talent that He gave me and also my father for teaching me how to play the guitar and sing. I am grateful even to the people who voted for me … thank you very much,” said the young boy after receiving the prize from the minister.

In addition, Ms Masebo told the young boy that he should continue singing for God as He (God) was the one who made it possible for him to win.

Season two of TYZ is already on cards as Minister of Tourism and Arts implored the private sector and the producers Location Challenge not to let such a show die out. She says it has Government support thorough her ministry.

“I am told that this competition was only from five provinces of Zambia, now let me make a point here that as Government, we are ready to support this show so that it should cutter for all the 10 provinces,” she said

Moreover, not all hope was lost for the finalist as the minister said that all the 12 who performed at the colourful event would be billed to display their immense talent at the UNWTO in Livingstone.

And Mr Kanyama assured that Zambia will soon see Season Two of the reality show hitting the screens.